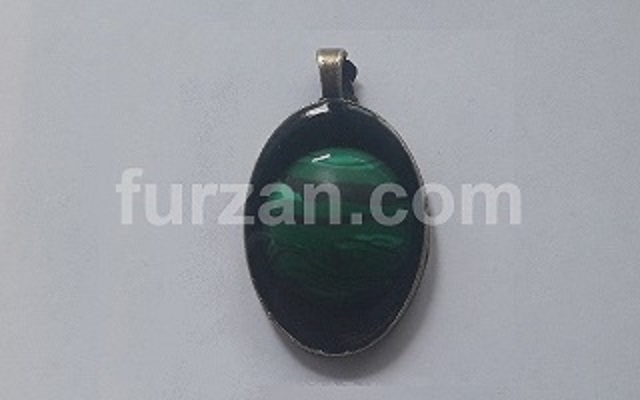 The word khodam means "spiritual server" or assistant. In the western world they are known as guardian angels, but in the Islamic mythology hierarchy, they are below the angels. A lot of people think that they are jinns, too, but despite them, the khodams can only do good.

Once bonded, it overshadows, constantly watching over, fulfilling needs, protecting, and guiding.

This necklace is made with malachite stone. We prefer to evoke and bind the khodam in this stone because of its great spiritual values. It helps the bearer to make better relation with his creature, so it will have more influence over him than the other stones. The stone helps the owner to open his mind to the help of the khodam. It also protects its bearer from misfortunes and troubles.

Here are some of the benefits of this item:

1. Protection from sharp weapons and poison.
2. Protection from any kind of kala jadoo, curses and hexes. If the enemy sends djinns against you, they won't be able to reach you, no matter how strong they are. The attack will be reversed on its sender.
3. Everyday problems in every field of life starts solve automatically – findng a new job, raise of salary or higher position, harmony in family.
4. It helps you make the best decisions in your life.
5. It improves your concentration, courage, and mental and spiritual strength greatly.
6. It provides an increase in your psychic and intuition and helps in the opening of the third eye.

Over the talisman there is polymer resin, so the khodam will be protected.
It does not matter who is the owner of the necklace—male or female— It works for both genders. There is no need for prayers or chants to activate it-just wear it.
As long as a person wears this necklace, its powers grow.
You can rub on it from time to time small amount of good smelling attar - etteric oil or non-alcoholic perfume to increase its powers.

The great Sufi mystic Al-Idrisi speaks about a khodam that he evoked in his early 30s, which was so powerful that he materialized in front of him and they discussed different issues a lot of nights. The khodam stayed with him for 10 years. According to Al-Idrisi in his book on the matter of the spritual creatures, "Kitab al moakilat" tells us the story of the khodams. They were inhabitants of the empty space long before our known universe was created but they werre chaotically spreaded everywhere. After Allah created the Earth and humans, he ordered his angels-servants to bring all khodams here on Earth to help humans.

Keep in mind that only very pious and sensitive people can see khodams or djinns in real life. Most people can only feel their presence around them.

80 USD or 73 £ including worldwide shipping