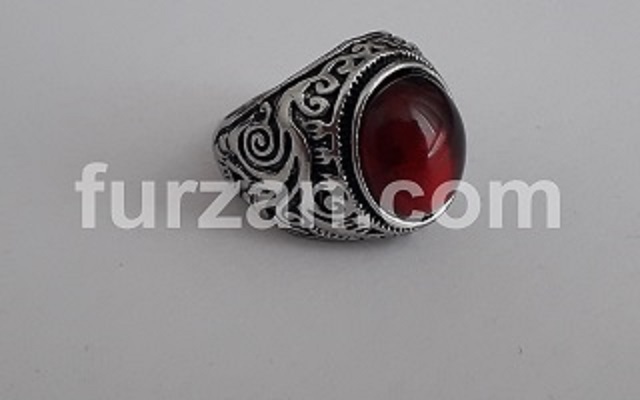 Al-Ahmar djinn king is one of the most powerful djinns in the world. He is associated with the planet Mars and is also known as the "blind lord" because of his blind fury against his enemies. Its symbol is the five-pointed star, known as pentagram. Al-Ahmar was one of the first inhabitants of the mystical mountain Qaf.
Usually he is described as a black skin giant with multiple animal heads riding a lion and holding sword in one hand and human head in the other. With his extremely fierce vengeance, he is a threat to everyone who stays in front of him.

He is also known as the lord of all Qarins. (Qarin is an eternal companion to every human , known also as a guardian angel in the western world.) Because of this, Al-Ahmar gets along with all humans very well. Due to his nature, he gives full protection in any situation. He watches people's backs 24/7. And if the enemy starts engaging, only Allah S.A.T. will be able to save him from the wrath of Al-Ahmar.
The ring is completely safe for its owner and his family. Only enemies must be scared of it and its powers.

It can protect you from different kinds of natural disasters and from being bitten by animals, domestic or wild. On a battlefield, this ring protects from enemy attacks and gives enormous power, rage, and luck in the battle for its owner. We have heard stories from soldiers fighting ISIS in Syria, which are swearing that on some moments they saw Al-Ahmar appearing as a three meter tall black naked man walking in the ruins of devastated town of Deir Ez-zor.
It can also be used in sports competitions with great success. It brings blid sport fury and will for winning like you are on steroids.

The first time a person feels the power and aggression of Al-Ahmar, he may get shocked, but with time he gets used to it and the adrenaline addiction.

The great sufi teacher Ahmad Al-Idrisi (don`t be mistaken with Muhammad al-Idrisi) in his book - 'kitab aljini walarwah' describes one interesting case of a villains who wanted to rape young woman in the city of Hibabiya. The woman wore a necklace of Al-Ahmar and, all of a sudden, a pack of wild dogs appeared and tore in pieces the three men with such fury that their body parts were found all around the city and the locals couldn't forget their screams in years.
Such is the rage of the great red djinn king Al-Ahmar!

Remember that this ring is not for acquring wealth , fame and wish granting but for things that could save you and make you a hero in the end of the day. There is full anonymity regarding your purchase.